HOME » Patent Medicine: About the Collection

Patent Medicine: About the Collection

The Patent Medicine collection consists of a wide range of materials documenting the patent medicine industry from the mid-nineteenth century to the 1960s and 1970s. Although herbal tonics and remedies are of ancient origin, it was not until the nineteenth century that the making and marketing of patent medicines became a significant industry, particularly in North America, and patented concoctions such as Burdock Blood Bitters, Dr. Thomas’s Eclectric Oil, and Cherry Pectoral became household names. The industry reached its zenith in North America in the 1880s and 1890s, sponsoring multi-million dollar advertising campaigns to reach an ever wider audience and market share. One commentator has noted that “such huge sums were spent on newspaper advertising that the newspapers and magazines were mainly supported by the patent medicine industry in the decades following the Civil War”. James Ayer, one of the kings of the industry, advertised in some 1,900 newspapers and periodicals, and ran his own paper mill in order to produce an annual almanac which he distributed in sixteen million copies in twenty-one languages. In 1892 the Ladies Home Journal ceased to accept patent medicine advertising. In 1904 it printed the results of chemical analyses of patent medicines, and the subsequent publicity and public discussion helped to bring about the passage of the United States Federal Food and Drug Act in 1906 and the Proprietary or Patent Medicine Act in Canada in 1908. The industry then rapidly declined—from a total of 22,000 patented medicines in Canada before the legislation to a mere 1,500 different products in 1976.

The collection includes examples of a variety of printed materials used to advertise the medicines, from actual product labels and tradecards to health guides, songbooks, cookbooks and almanacs. Almanacs, because they are annuals and the Library often has extensive runs of a particular tide, afford an opportunity to trace the development of the industry and its advertising strategies over a period of many decades. Almanac advertising depicting logos, trademarks and graphics associated with brand names, popularized a company’s image and made it recognizable and familiar to readers.

Printed almanacs have an illustrious history, going back to the incunabula period. One of the first products of Gutenberg’s press was a sheet almanac of 1448, and almanacs were bestsellers of the seventeenth and eighteenth centuries, as well as being among the first imprints of many of the pioneer presses in Canada. Their popularity, and the fact that they were consulted by the household throughout the year, made them the ideal vehicle for advertising. By the latter decades of the nineteenth century, almanacs survived mainly as promotional handouts for commodities such as patent medicines, insurance and even sewing machines. While they still contained many of the traditional elements, including the calendar, weather prognostications, riddles, rhymes and anecdotes, the bulk of the contents consisted of overt product advertising and testimonials from satisfied customers, relating the details of their miraculous ‘cures’.

The first Canadian patent medicine almanacs date from the early 1860s, and there are also many examples of Canadian editions and issues produced by American firms for the Canadian market beginning at the same time period. The American almanacs are commonly found with the stamp or printed advertisement of their Canadian distributor on the back cover. In the Ayer's series, for which we have issues dating from the second year of publication (1862) to 1923, there are examples of distributors from St. Thomas to Picton, and some from Ontario towns now virtually unknown, such as Bainsville, St. Ann’s and Burgoyne. Separate Canadian editions of American almanacs were also produced, with Canadian content differing from that of their American counterparts, and some of these were also published in French language editions. In some cases the collection contains both Canadian and American editions of the same title for the same year. 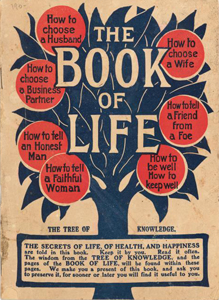 The earliest Canadian imprint in the collection, R. Stark’s Canadian Almanac and Receipt Book, was published in 1861 for the druggist, Robert Stark, in Woodstock, Ontario. This series lasted only three years, but is notable in that Stark “late student of material medica… Glasgow University” appeared to have prepared his medications himself, and was not merely acting as an agent for a large manufacturer. His products offered cures for both man and beast, and included Cherry Balm, Magical Pain King, and Mecca Horse Cure. Another early example is Georgens Canadian Almanac and Recipe Book for 1871, published by T.W. Georgen & Sons in Barrie, Ontario, and printed by Lovell in Toronto. It includes some discussion of a dispute over trademarks with the American firm of Radway & Co., which was decided in favour of Georgens by a Canadian court. The Davis & Lawrence Co. of Montreal was a prominent Canadian firm and its Pain Killer Almanac appeared from the early 1870s. The T. Milburn Company was started in Acton in 1867 and moved to Toronto in 1873. Its product, Burdock Blood Bitters, was also a Canadian invention, and the collection has examples of its almanacs from 1879 to 1931. Northrup and Lyman was another successful Canadian firm, established in 1854 in Newcastle, Ontario and moving to Toronto in the mid 1870s. They were the Canadian agents for Ayer’s products, but also manufactured some of their own medications, including the Canadian Pain Destroyer. Another successful Canadian firm was Dodds Medicine Co. ofToronto, and the collection contains examples of its almanacs from 1899 to 1961.

In this brief overview of the patent medicine collection, the discussion has been mainly limited to almanacs, but of equal interest are the cookbooks, songbooks, family health guides, and tradecards. Each genre of material repays study for historians of medicine, as well as of print culture. These printed artefacts are a fascinating index of the popular culture oftheir day.

Context
The University of Toronto Libraries aim to foster access to knowledge, and to preserve and develop specialized collections. Through our Digital Library we are now making our unique resources available and useful to those beyond our own community. On this site we are offering broad public access to a collection of historical materials which form part of the record of our past. These primary historical documents reflect the attitudes, perspectives, and beliefs of their time, and therefore may contain offensive language or negative stereotypes.

Copyright and Other Restrictions
Copyright for the contents of The Patent Medicine Collection website belongs to the University of Toronto Libraries. The Libraries provide access to the materials included in The Patent Medicine Collection digital collection for the purposes of research, teaching, private study, or general interest. For these purposes the images and transcribed texts may be viewed and printed without prior permission, on the condition that you provide proper attribution of the source in all copies.

Credit: University of Toronto Libraries
Publication, redistribution and/or broadcast in any form, including electronic, requires written permission from the Library.

Reproduction and Permission Requests
For reproduction requests please fill out the Digital Photography Order Form and send/fax your request to the address listed on the form.