The Classics Department Papyrus Collection at the University of Toronto’s Thomas Fisher Rare Book Library was formed by Alan E. Samuel when he arrived at the University of Toronto in 1966. The collection consists of three inventory types: the Paper Towel (PT) Inventory, which was purchased in 1965 by Samuel when he was in Egypt; the Oxford University Gazette (OUG) Inventory, which consists of small fragments excavated from El Hibeh by Bernard P. Grenfell and Arthur S. Hunt in 1902 and 1903; and the Rostovzteff-Welles (RW) Inventory, which consists of larger papyrus fragments from the same source as the OUG Inventory. The entire collection was described by Clare E. Barker in 2014 with information on the condition and contents of each inventory designation and lists the storage method, material type, language(s), proposed date(s), document type(s), number of fragments and dimensions. The collection consists mainly of Greek documents and letters extracted from Ptolemaic mummy cartonnage dating to the third century BCE, but there are also a few Demotic pieces, as well as late Greek papyri, three Coptic pieces and one Arabic letter. The papyri fragments were photographed in visible light and near infrared. The near infrared photographs improve the legibility of the ink by increasing its visibility through thin layers of gesso and certain stains. Additionally, the contrast of the ink against the papyrus background is high at near infrared wavelengths, which improves the legibility of extremely darkened papyri and effaced, faded and washed out ink.

With thanks to Clare E. Barker for preparing this collection description and all of her work on the collection in 2014. 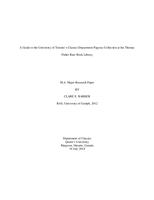 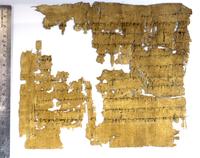